Located between the coordinates 22.2461° North latitude and 76.1503° East longitude, the sacred land of Omkareshwar in Khandwa district of Madhya Pradesh resembles the shape of ‘Om’, one of the most sacred Hindu symbols and is home to the Jyothirlinga shrine, dedicated to Lord Shiva and numerous other temples and places of worship. This city is known for its rich historic and cultural traditions and attracts huge crowds of visitors and devotees from all over the country as well as from outside. The sanctity and divine aura of this place provides the visitors a blissful and a joyous experience. 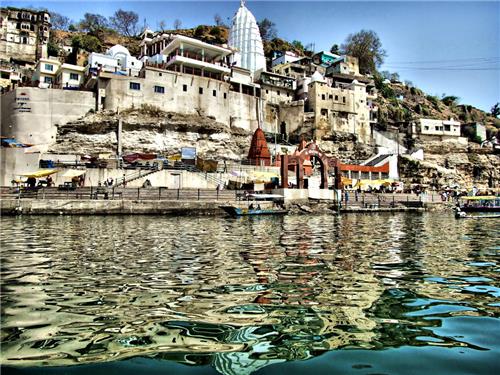 The climate of Omkareshwar is extreme, with very hot summers and cold winters. In summer during the months of March to May, the temperature is around 29°C to about 45°C. Winter season in Omkareshwar lasts from December to February, when the minimum temperature is about 6°C, while the maximum temperature is about 29°C. Monsoon season in Omkareshwar is from June to September and it receives average rainfall during this period. An ideal time to visit this city would therefore be during the period from October to March, when the weather is relatively pleasant and you get to visit the religious and tourist sites here with your near and dear ones. Mahashivratri festival is celebrated here amidst great fanfare and fervour during February – March. You can also participate in this grand celebration that attracts huge crowds of devotees from far and wide.

Business and Economy in Omkareshwar

Majority of the people living in Omkareshwar are dependent on agriculture and allied activities for their living. The fertile black cotton soil and irrigation facilities available here are conducive to the growth of a variety of crops. The farmers here are thus able to cultivate about three crops a year. The major crops grown in this region include fruits, grains, vegetables, soya beans, sugarcane, cotton, chillies, groundnuts etc. Animal Husbandry is also practised to a considerable extent by the people living in Omkareshwar.